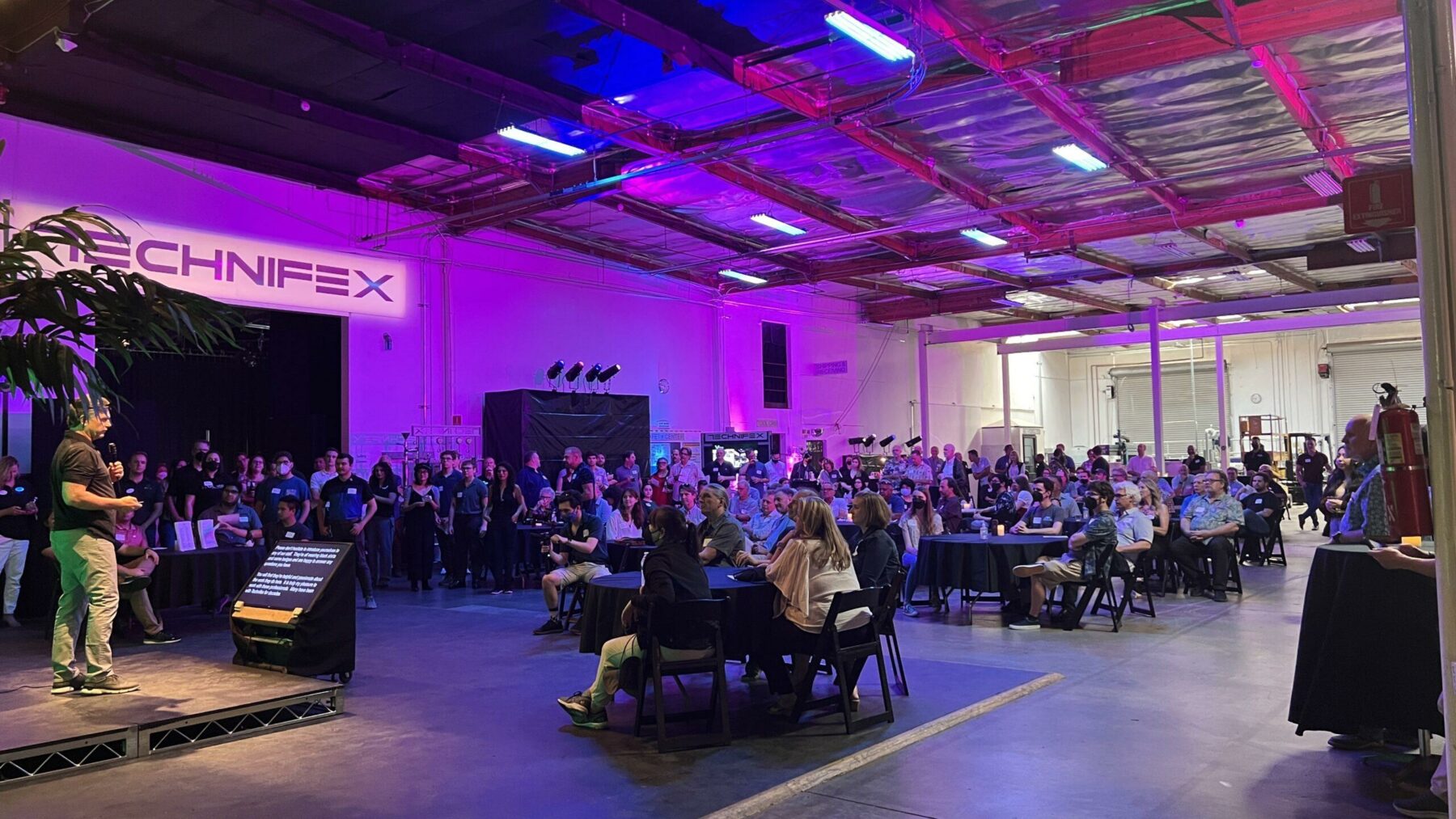 Technifex put on a rockin’ TEA Western North America division in-person Open House event Thursday, June 23, 2022 in their Santa Clarita special effects facility for 200 TEA and VIP attendees.  Guests enjoyed the balmy evening with drinks, great food and a celebratory toast on the 30th anniversary of the Themed Entertainment Society. Presented by Monty Lunde, founder of the TEA and co-founder of Technifex, shout outs were made to some of the founding board members and companies that were present at the event.  The history lesson of the beginning days of the TEA, that not many have heard, enthralled the guests with a roaring round of applause, grateful to have such a wonderful association to provide friendships and opportunities in our chosen careers in themed entertainment.

Rock Hall and Monty Lunde started Technifex 38 years ago to provide high-quality special effects and over the pandemic revamped to V 2.0 to become a family of technical solution companies – Technifex LLC which focuses on the engineering and production of custom entertainment systems, Technifex Products which focuses on the development, assembly and sale of their patented products,  and the newly launched Technifex XR which creates highly visceral and immersive training and simulation systems.  All of the products and VR immersive training systems were on show in the self-walking interactive tour of the fabrication facility, water test pool and magnificent showroom.  Friends had a blast testing out the newest product, the Sensory Floor, with a VR experience of walking across a rickety bridge over a vast canyon, with all of the sensory effects to add the element of surprise. EVP Ian MacVittie assisted guests into Technifex XR’s simulation and training VTAC military system to demonstrate what it’s like to direct (virtually) an air and land attack amidst a war zone.  Others experienced the Technifex Water Lab with an outside 20,000 gallon pool demonstrating various water features, led by John Polk. Others jumped on the golf carts to be escorted two buildings away to the Technifex Products Showroom, filled with 38 years of patented products.  VP Ryan Lunde led demonstrations of the FauxFire products, a walk through the Water Web, and a nostalgic play of a pepper’s ghost virtual soda machine which provided a Technifex souvenir coin.

ORIGIN OF THE TEA

Celebrating 30 years as an association is certainly a milestone, one that Monty Lunde is exceptionally proud to have provided the spark that ignited an industry.

On August 14, 1991 Monty Lunde crafted a letter outlining his thoughts about vendors organizing and forming an association, much like IAAPA that represented the owners and developers of the industry, the Themed Entertainment Association would represent the suppliers of the industry.  (Link to original letter).  This letter was sent to 45 business owners in the Themed Entertainment industry – the response was overwhelmingly positive. The goal was to pull companies and individuals together to allow a form of communicate with one another and together develop and learn best practices.

The first discussion meeting was held in October of 1991 at the Burbank Hilton. Everyone who attended wanted the ability to control their own destiny (in relating to clients/owners/developers), receive due credit for their work, set industry standards, and grow a professional community.

A final organizational meeting was held in November of 1992 at IAAPA Expo in Orlando.  Forty plus companies and senior managers voted to formally launch the Themed Entertainment Association.  They also elected our first nine board members:

The first TEA board met on Saturday’s at Technifex, in 8-hour sessions to discuss the mission, focus and development of critical committees.  There was no paid staff, only volunteers, mostly owners of the various TEA Charter Member companies who championed the idea “we could do better together!”

As the association grew, it expanded to include the owners and developers in our industry with the idea that positive connections would happen with their input and a seat at the proverbial table.  Ever since, Disney and Universal have held TEA International Board seats.

In the early years Technifex was also the TEA home office and for six years shouldered the duties of the TEA office using in-house staff.  In 1997 Peter Chernack was elected President and took on the responsibilities of the TEA office from his own company, followed two years later by John Wright of Lexington Scenery accepting the baton. This typifies the dedication and volunteerism that continues to exist in the TEA today.  There have been hundreds and hundreds of volunteers supporting events, educational sessions, open houses, and serving on the various boards and committees.

Monty Lunde adds “I am very proud to have been the spark that ignited the TEA.  I’ve met the most incredibly dedicated people over the last 30 years.  I’m most proud of the fact that the TEA is the ultimate industry connector.  We have all met people and created business relationships that would never have occurred if not for the TEA and our amazing network.”  In praise of the TEA now “As an association, we’ve developed programs to educate ourselves, and the next generation.  We recognize and celebrate both major projects at the Thea’s as well as the Masters of their Craft who represent our most talented individuals. We’ve also developed a myriad of events and programs that connect people from both inside and outside of our industry.”

We’ve come a long way for an association formed by a crazy 31-year old kid.

Happy Anniversary to the TEA and here’s to the success of the association over the next 30 years!